A Twitter Space on Feminism Has Been Going on for 12 Hours Since Last Night and People Are Not Happy!! 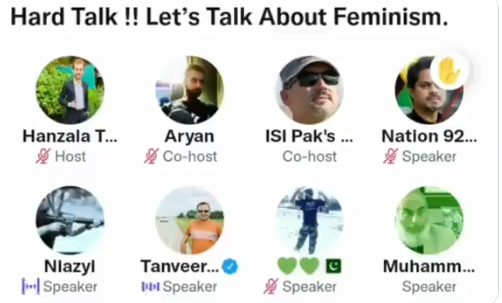 Last night a group of men started a Twitter Space to discuss women rights and feminism in Pakistan. The name of the Space was “Hard Talk with Hanzala – Lets talk about Feminism”. The Twitter Space was originally hosted by Hanzala Tayyab with the twitter handle @MHTSquad. Here is the brief of what went down on it and why it went on for all night!

The Space initially started an open discussion on feminism and the state of women rights in the country, however the platform was dominated mostly by men. The discussion soon steered towards a much more aggressive tone when many speakers came out with a victim blaming mindset. The Space exploded when Aamir Liaqat’s second wife, Tooba Amir, joined the space to educate many on the repercussions on what it meant on pointing the finger at women. The Space took on views on what role men have to play in the depleting status of women to discussing many feminist slogans.

Apart from the space shutting down women who wanted to represent the stance of women, the space was also called out for many men carrying “toxic” views on causes of greater acts of violence against women. Many came out to state that women need to be protected and hence need not travel alone. While others states how women have been given rights which is evident from how many army officials have given their lives to protect the women of the country.

The space only highlighted how many men carry a sense of privilege and are unable to mentally give up their power hegemony in society. It also brought to light the lack of patience and empathy many are unable to carry for the victims of violence. The space then went on to discuss solutions for this issues, however the same narrative was repeated without any change of mindset in sight, making the entire discussion futile. It did however, end up being the butt of memes and jokes for other to enjoy. Here are a few examples:

Farah Talib Aziz’s Latest Campaign is Everything You Need Right Now for This Wedding Season!