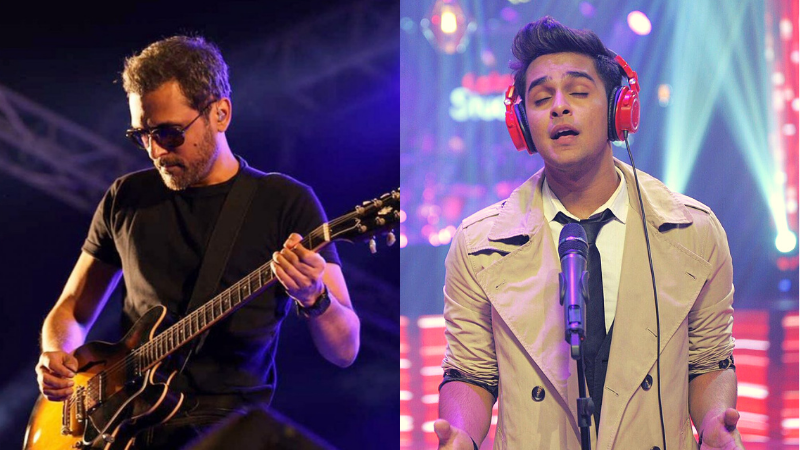 Two of Pakistan’s biggest names in music got together for a jam session on Wednesday night! Singer Asim Azhar and Strings’ co-frontman Bilal Maqsood chilled and jammed with each other, sharing videos of their impromptu musical moments with fans on Instagram.

We haven’t got to see a lot of Maqsood playing music after Strings announced they were parting ways, so when a video of him singing comes our way, we lap it up like the eager fans we are. It seems to us like Azhar and Maqsood got together to work on a special project. They’ve definitely got us wondering what it could be.

“He came for work but was sweet enough to entertain all of us,” Maqsood wrote about Azhar on Instagram. He shared a video of himself and Azhar singing Strings’ hit song ‘Soniye’. Azhar also sang Shuja Haider’s ‘Nawazishein Karam’ in another video shared by Maqsood.

Azhar also took to Instagram Stories to share Maqsood’s video with his followers. “I didn’t know Bilal Maqsood doesn’t like to sing in front of family at home,” he wrote. “But I requested him to sing my favourite Strings song, which he did, and I did too! Thank you Bilal Bhai for always being so amazing!”

Azhar had shared a video of his own that was then deleted by Instagram due to copyright issues.

Many followers showered love onto the videos, including Maqsood’s bandmates from Strings, bassist Bradley Dsouza and drummer Aahad Nayani.

Other fans expressed their excitement at the jam sessions as well.

Azhar recently celebrated eight years of being in the music industry with hit singles likes ‘Jo Tu Na Mila’. If his impromptu jam sessions with Maqsood are this good and our theories about their project together are right, we’re in for some awesome music.

Pakistani Ads That Can Teach Masses About Parenting