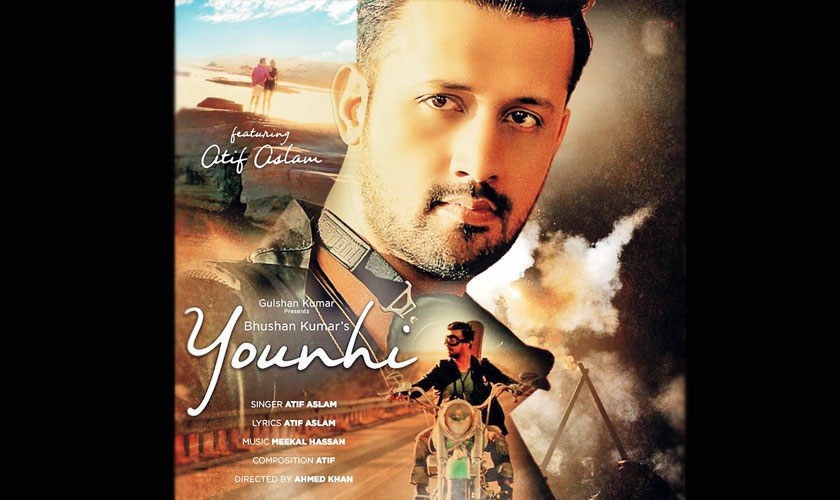 This year, with the arrival of his birthday, Atif Aslam – the pop singing sensation of Pakistan – has released the first song from his latest album.
The singer made the announcement two days prior to his birthday and took to twitter to share the good news with his fans.
He posted: “We have a special gift for you all on Atif’s birthday this 12th. #Younhi teaser coming out tomorrow!”
The first song from Atif’s latest album was, therefore, as promised released on Sunday.  The song has been written and sung by Aslam himself, while the music has been produced by Mekaal Hasan.
The first look at the video of the song immediately reminds its viewer of his old songs and how his videos were made back in the day, as the concept as well as the cinematography has been perhaps influenced from his old videos and do not look really fresh.
So, here’s where we will sum up the story of the video for you:
The video opens with a scene as Atif Aslam walks in a room filled with people (also where her girlfriend is sitting with her friend and sharing a good laugh). Atif is not amused when his girlfriend calls him in to join her and her friends and decides to walk away. The girlfriend chases him when the two bicker over how she spends too much time with her friends, she on other hand, verbally attacks Atif and calls him a ‘loner’. Long story short, Atif then (feeling left out) sets off on a road trip all by himself, where he meets a lot of new people and makes new friends all by himself.
As many have pointed out, one fair thing that can be taken from the video is that Aslam isn’t shown as a forlorn lover, instead uses his situation in a positive way.
Moving on to the musical aspect of the video, even though Atif Aslam’s voice is heavenly, his new song has a very old school Atif Aslam vibe, with similar guitar riffs we are used to hearing in his old music.
‘Younhi’ may not be our most favorite song and might not make it to our playlist on repeat, but from what we have gathered the fans are excited as well as optimistic about Atif Aslam’s new album.
Watch and listen to the full song by clicking on the link below: