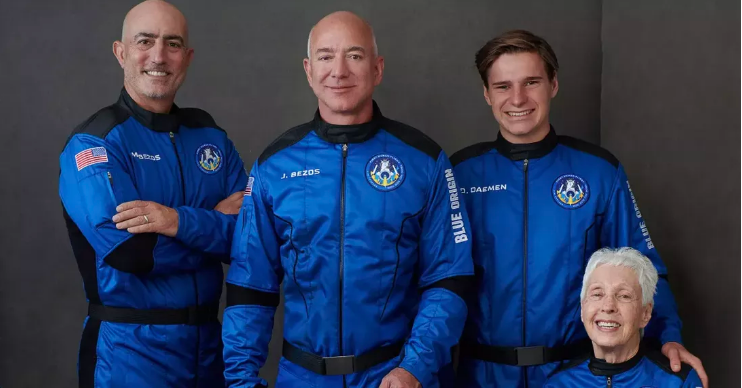 Founder of Amazon, Jeff Bezos made a short journey to space last Tuesday. Bezos who is the owner of Blue Origins, a private aerospace manufacturer and spaceflight services company, took his company’s launch vehicle named “New Shephard”, for a brief 10 minute and 10 seconds flight. Bezos was accompanied by his brother, Wally Funk (the oldest person who has been to space) and an 18 year old student. The rocket reached the Karman Line – the most recognized space boundary- and went came back down. Bezos announced it as a revolutionary step towards space tourism and insisted on having an environmental vision in making space accessible. He proposed moving polluting industries to space, to keep the planet clean.

Jeff Bezos trip to space was preceded by Richard Bransons trip to a suborbital jaunt above New Mexico. Branson, who rode his Virgin Galactic space plane, is a fellow billionaire, was the first to receive a commercial space license and was allowed to carry passengers to space. Bezos’ license immediately followed. Apart from Bezos’ Blue Origins, the tech giant Elon Musk, has SpaceX, which pioneered private space companies. SpaceX was the first privately owned company.

It is quite clear that a race between the billionaires have started, as to who reaches the furthest in space. With Elon Musk already launching probes to Mars, it seems like the dominant player in the space race, NASA, has taken a backseat as being a primitive institution. While these privately owned companies are shooting ahead. This may seem like a win for science, however in the midst of a global pandemic and environmental crisis, many see it as unnecessary and a mere game for the rich, while those who are underprivileged either starve or die.