The Coca Cola’s coke versus Lipton’s tea brand war is on and in acceleration. The word has it that coke versus tea war is one of the most intense brand wars currently taking place in the Pakistani beverage industry as the competition is not just among tea brands or cold beverage brands only, but has escalated to a new level which is: Coke Versus Tea.
Tea (Chai) is not just an ordinary drink for the Pakistani consumers, it is a way of life, it is the most beloved drink of the nation.
To give our readers a brief overview of how and from where the rivalry began is when Coca-Cola launched its ad campaign whereby it glorifies coke as a morning refresher, that too by putting down chai. The brand used a tag line which stated “Zaalima Chai Nahi, Coca Cola Pila dey”.  This ad sparked a rivalry between the cold drink manufacturing company Coca Cola, with those that produce tea such as Lipton, Tapal etc.
Watch the full TVC here:
https://www.youtube.com/watch?v=VzrDyfbYDHk
Another TVC was later released by the Coca Cola company where the bride refuses to drink tea and conveys her uneasiness and displeasure through her facial expressions at tea being offered to her, and this is when her eyes catch a glimpse of the cold soft drink. The groom, too, who realizes what the bride desires asks for a Coca Cola instead.
Watch the full TVC here:
https://www.youtube.com/watch?v=IZrB1e42UiU
Only a few days ago Lipton has finally upped its game and come back with a stronger tag line which says: “Pakistani’s love Chai ZALIMA… Nice Try.
Below is the new ad released by Lipton Pakistan: 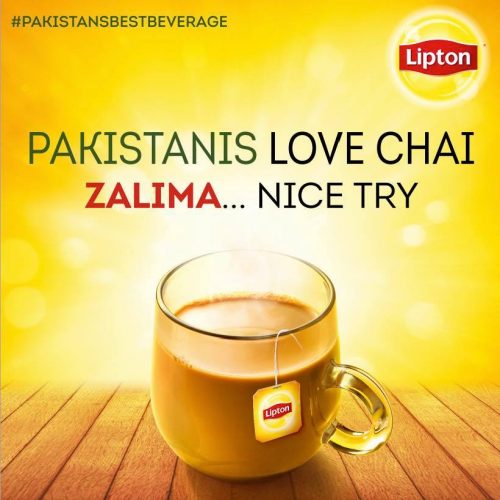 Since, Lipton (one of the leading tea brands in Pakistan’s beverage industry) has finally responded to Coca Cola’s call for challenge, and that too in a witty and humorous manner, the social media has further gone into a frenzy over the on-going and one of the most entertaining brand wars of 2017.
Both Chai and Coke lovers are now found defending and supporting their drinks over social media.
Do let us know in the comments section below, what you think about the current campaigns led by both brands and which side are you on?
While, we eagerly await to see if Coca Cola further has anything to offer in return.