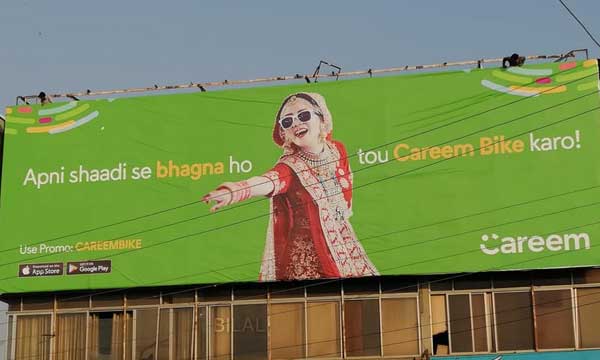 Careem Pakistan is known for its marketing campaigns that are smart and witty. However, the brand’s latest campaign tried to take a very different take to promote its Careem Bike service, which does not seem to sit well with a part of the population.

A billboard was put up which read ‘apni shaadi se bhaagna ho tou Careem Bike karo!’ (If you want to run away from your own wedding call a Careem Bike). The billboard also portrays a girl all dolled up for her wedding and is happily ready to become a ‘runaway bride’.

Some see Careem’s campaign as a light-hearted attempt at humour, while others have spoken against the brand claiming that they have crossed a line by promoting such actions. The concept being used goes against the cultural values and traditions and encourages unconventional behavior. On another note, it does raise the issue of forced marriages.

Dnt play with our Norms and culture For ur Business Here…find some sensible script which will get Careem some respect not attention! #Careem

So what do our readers think about Careem’s latest ad campaign? Share your thoughts in the comments section below.

Instagram Update: Rolls Out An In-app Buying Feature For Users