NADRA has issued an official CNIC too a Chinese man! Well yes you just read it right, Pakistani National Identity Card has been issued to a Chinese National.
A picture of a CNIC belonging to Feng Lin Cui has been going viral. According to his CNIC, the country of stay is in China, Mainland.
As far as my understanding is CNIC of a person is the identity of his nationality within a Country, it’s kind of a perplexing situation to accept a Chinese man as a Pakistani National
The entire situation reaches to a couple of options was the CNIC issued because he is a Pakistani by birth, and just got a Smartcard made, was it just a mistake or is it because of CPEC.
Well, if latter is correct then I guess we will be witnessing more of such CNICs.
China-Pakistan Economic Corridor is a framework of regional connectivity. It is a journey towards economic regionalization in the globalized world. It founded peace, development, and win-win model for all of them. China Pakistan Economic Corridor is hope of better region of the future with peace, development and growth of economy.
It’s time to get used to our Chinese brothers and start accepting this for a fact that we will be witnessing more Chinese population in Pakistan if the CPEC continues. 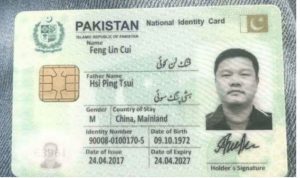 This New Song From the Film Rangreza is a Perfect Mehndi Song!