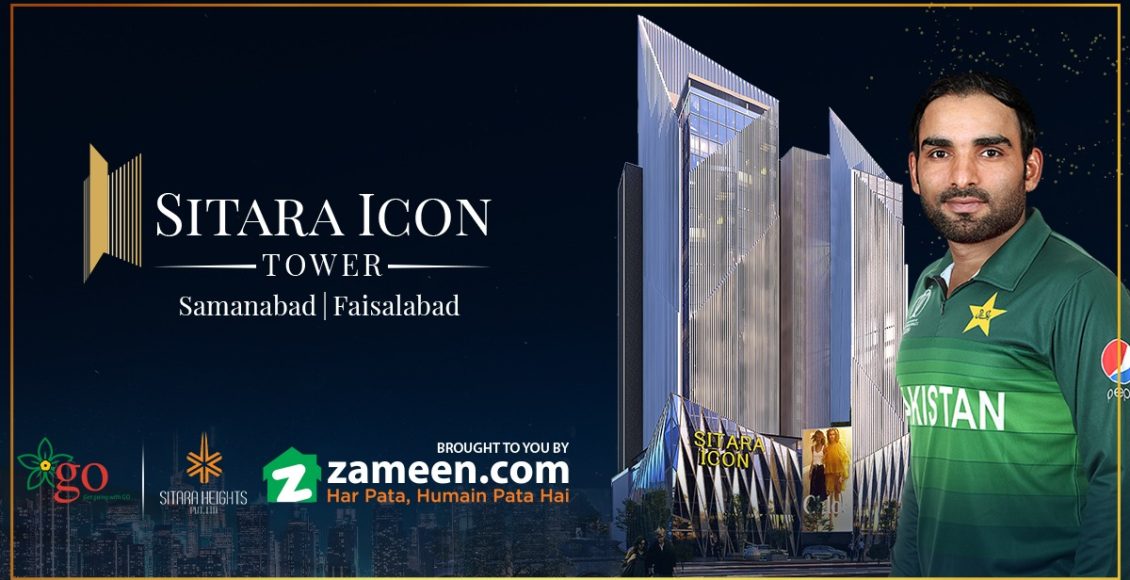 The Project Director of Sitara Heights Mazhar Abbas recently announced his decision to award a 3-bedroom apartment in Faisalabad’s tallest building, Sitara Icon Tower, to cricketer Asif Ali in recognition of his incredible performance against Afghanistan during the ongoing ICC Men’s T20 World Cup 2021. The match saw Ali hit four sixes in the last over to help Pakistan to victory.

According to Sitara Heights’ management, the apartment is a gift for the star player as he hammered four sixes in the final over of the match, leading the Pakistan Cricket team to their third consecutive victory in the tournament. Zameen.com’s Senior Director Sales (Central) Sheikh Shuja Ullah Khan took the opportunity to express his gratitude to the Sitara Heights’management for their kind gesture.

It is pertinent to mention here that Zameen.com is the official sales and marketing partner for the Sitara Icon Faisalabad project. In order to present the apartment to Ali, Zameen.com and the management of Sitara Heights will be arranging a ceremony upon the cricket team’s return to the country. The ceremony will feature some of the country’s most prominent and influential personalities.

Sitara Heights Project Director Mazhar Abbas stated that Asif Ali had earned a place in the public’s hearts with his outstanding performance against New Zealand and, in particular, against Afghanistan. As a reward for his achievements, he will be gifted a 3-bedroom apartment in Faisalabad’s premier residential apartment complex, Sitara Icon Tower. He further stated that this tradition will continue in the future for every Pakistani sportsperson that performs exceptionally well in international competitions.

Zameen.com Senior Director Sales (Central) Sheikh Shuja Ullah Khan remarked that the national cricket team of Pakistan had made the country proud with its consecutive victories against India, New Zealand, and Afghanistan. He added that Sitara Heights’ decision to recognize Asif Ali for his outstanding performance was quite commendable and he thanked them for taking the initiative to award Ali an apartment in Sitara Icon Tower.