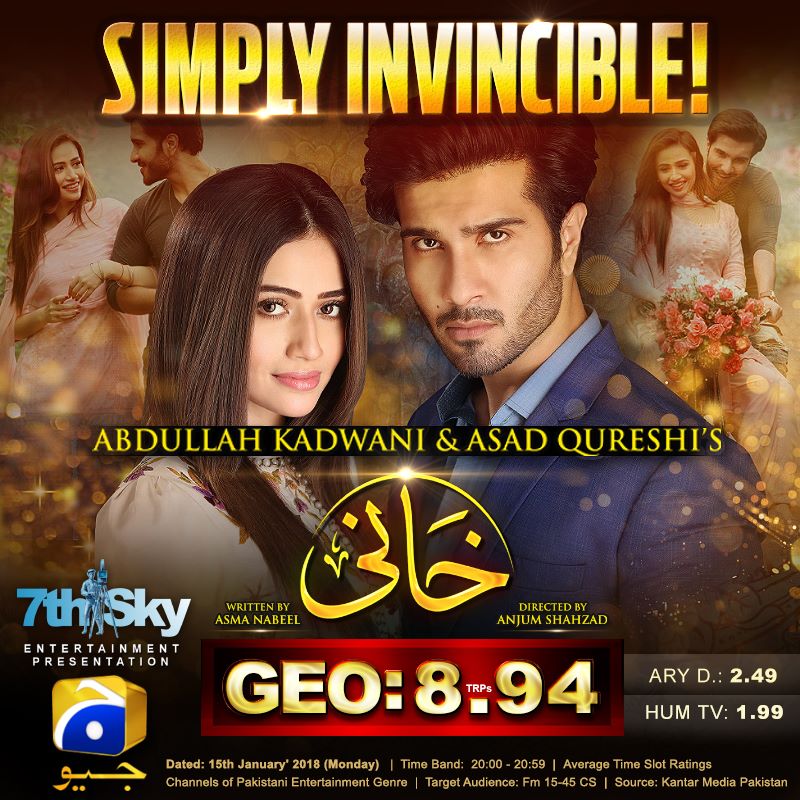 7th Sky Entertainment, one of the largest independent production house in Pakistan spearheaded by Abdullah Kadwani & Asad Qureshi, has once again proved that it provides quality entertainment as three of its current shows, signature production Khaani, Ghar Titli Ka Par and Aik Thi Rania, have been ranked as 1st, 3rd and 7th respectively on the list of top 10 dramas of the week.

All three shows are currently on air on Geo Entertainment.

The three shows have also been ruling their time slots, and getting the highest TRP week after week leaving all their competitors behind especially Khaani that can be considered one of the most successful serials of all time. It has been ruling the hearts of the audiences, and breaking records since its first episode, and also trending on YouTube consistently in the top 3 positions week after week. Khaani’s OST is the first one in the history of Pakistan’s drama industry to have received more than 10 million views in the shortest span of time. The show stars Feroze Khan and Sana Javed in lead roles, and airs every Monday.
The cast of Ghar Titli Ka Par includes Sanam Chaudhry, Shahzad Sheikh, Aiman Khan and Ali Abbas, and the show airs every Thursday while Aik Thi Rania has Sumbul Iqbal and Syed Jibran in lead roles and airs every Friday.