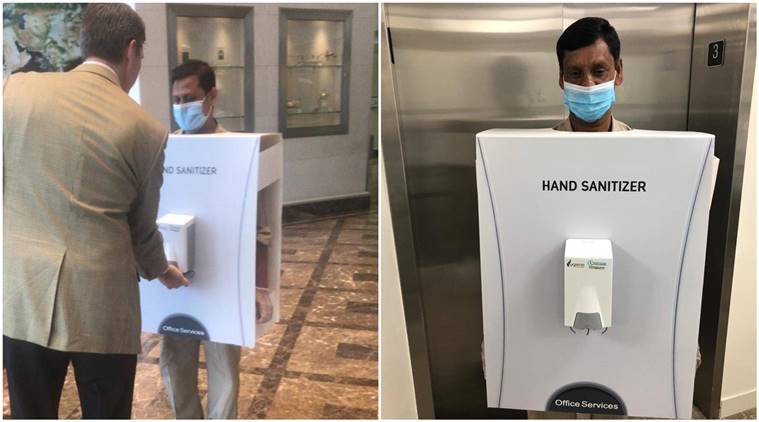 CoronaVirus – an ongoing pandemic has spread rapidly throughout the world. To take preventative measures, various workplaces have taken different steps to limit the spreading of the virus within their premises.

The worker who appears to be of South Asian origin, can be seen wearing a big white box that dispenses an antiseptic hand sanitizer.

The pictures went viral over the internet as different employees can be seen using the dispenser to sanitize their hands.

The concept was met with heavy criticism from people all over, considering how extremely disrespectful the notion is to a migrant worker.

The pictures also sparked a debate about the fate of such workers in Saudi Arabia.

The practice was condemned by renowned journalists, human rights activists as well.

Picture shows an Indian employee dressed up as a mobile hand sanitizer for the convenience of #ARAMCO’s American executives. https://t.co/RuCFNKR5NY

Bless the uncle who had to endure this obscene level of humiliation.

A South Asian worker in Saudi Arabia was forced to walk round the Aramco offices wearing a large hand sanitizer.

“Saudi Aramco would like to express its extreme dismay at this offensive behavior that was aimed at emphasizing the importance of sterilization, this was taken without the approval of the concerned company.”

Stay tuned to Brand Voice for latest news and updates!