Inside Junaid Safdar’s Nikkah in London 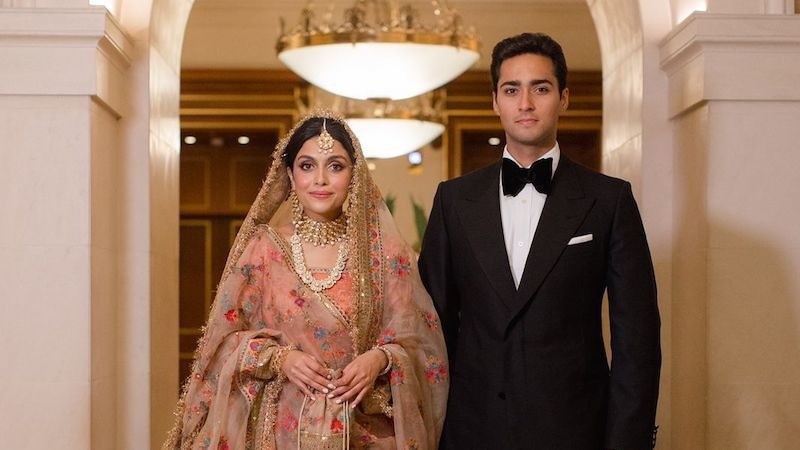 The wedding was held at The Lanesborough, a swanky 5-star hotel on the Hyde Park Corner in Knightsbridge.

Maryam and Captain Safdar did not attend the wedding. She had earlier announced that she would not request the government to allow her to travel to London for the ceremony. She posted pictures from the nikkah on Twitter instead and captioned them “May God keep you safe and happy”.

Former premier Nawaz Sharif and former finance minister Ishaq Dar were at the wedding and sat right beside Junaid as he signed the nikah papers. Maryam and Safdar, both of whom are in Lahore, were on video call with their son during the wedding. We don’t know where Junaid’s tuxedo was from but the bride’s lengha was from Indian designer Sabyasachi.

While we also do not know much about the bride, we can confirm she is the daughter of Saifur Rahman Khan, a close confidante of Nawaz Sharif, who was made chairman of the then Ehtesab Bureau during Nawaz’s second tenure as prime minister in 1997.

Ali Dar, son of Ishaq Dar and uncle to Junaid, posted a congratulatory message on Twitter. “Here’s to an eternally blissful life ahead,” he captioned a picture of him and Junaid at the wedding.

Junaid’s cousin Zayd, son of his maternal uncle Hussain Nawaz, also posted a picture with him on Instagram.

Shehbaz Sharif’s son Suleman and his wife also attended the wedding and posed with the groom.

A small group of people who appeared to be PTI supporters staged a protest against Nawaz outside the venue, with PML-N workers intervening to disperse the group.

Xiaomi’s Redmi 10 rumoured to be the next budget range style-icon!