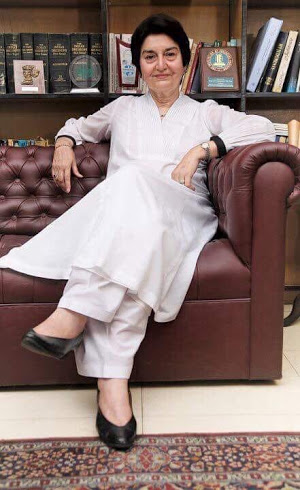 It is speculated that Justice (R) Nasira Iqbal might be chosen for the task.

Many are already aware that she’s Allama Iqbal’s daughter-in-law, however, she’s much more than that.

Nasira Iqbal has majored in Law, and as a legal scholar, she has represented Pakistan on an international level time and again. She was also one of the first five women to be appointed to the Lahore High Court. She served there from 1994 to 2002.

Ms. Nasira also had various honors to her name, like the  Fatima Jinnah Medal for Women’s Rights in 2006, the Woman of the Year Star Award in 2007, and the Wonder Woman Award in 2011.

Here are some of the posts people have been sharing online about election of Nasira Iqbal as the president of Pakistan.

One of a Close friends from PTI Officials has informed that the name of daughter in law of Allama Iqbal,Justice (R) Nasira Iqbal is being considered as Pakistan first female president…
I have met her twice and she is indeed a very well deserving person for the Post❤️❤️ pic.twitter.com/YATRnJpTAi