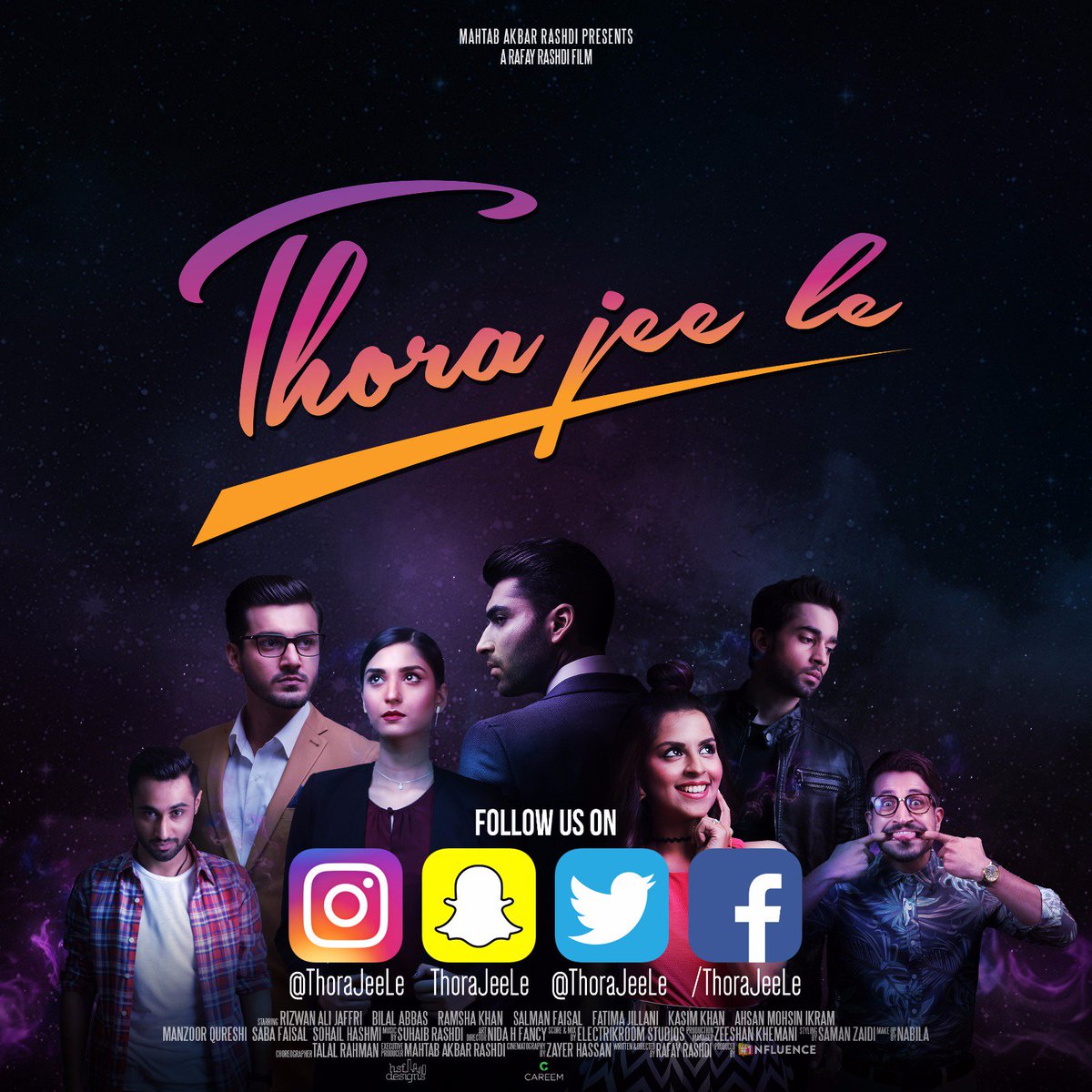 ‘Thora Jee le’ is a comedy/drama film written and directed by Rafay Rashdi, produced by 1NFLUENCE and executively produced by Mahtab Akbar Rashdi. The youthful movie has been shot in Karachi and Larkana.
The cast includes some of the young and talented actors in the Pakistani film industry namely, Rizwan Ali Jaffri, Bilal Abbas, Ramsha Khan, Salman Faisal, Fatima Shah Jillani, Kasim Khan and Ahsan Mohsin Ikram.
The premier had a star studded red carpetwith the star cast of the movie. ‘Thora Jee Le’ released on20th January 2017 under the banner of Hum Films. The story revolves around seven individuals belonging to different backgrounds and how their lives transform as they enter their practical life.A story about self-discovery, dosti, tafreeh, jigri & yaari between friends, who venture on a journey of a lifetime only to discover that fate has different plans, for all of them.
“Thora Jee Le has been releasedin all cinemas nationwide and every individual must go and watch the film to support Pakistani cinema and the new talented actors in the movie. The actors debuting in the filmhave a chance to shineon this platform which will boost their career professionally and help them rise and shine in the Pakistan Film Industry. Thora Jee Le is a wholesome entertainment for cinema goers.” commented Mahtab Akbar Rashdi executive producer of the movie.
“Thora Jee Le has a youth-based and heartwarming story and I am grateful for all the love and support during our promotions and we are looking forward to a great feedback. Many people can relate to the movie as it is packed with comedy and entertainment.” says director Rafay Rashdi, the writer and director of the film.
The music of ‘Thora Jee le’ is composed by the very famous Suhaib Rashdi with sound by Electrikroom Studios.
“HUM Network has always provided new and talented artists to the Pakistani film industry and we are proud to live up to our promise of providing quality entertainment to our viewers making Thora Jee Le the first release of the year. This movie Thora Jee Le has joined the packof HUM Films.” Sultana Siddiqui, President HUM Network. About Thora Jee Le:
Thora Jee Le revolves around 7 individuals belonging to different backgrounds and how their lives change from college to practical life. You see them getting back together to catch up and from there they go on a journey to relive their friendship and strengthen their bond. A story about self-discovery, dosti, tafreeh, jigri & yaari between friends, who venture on a journey of a lifetime only to discover that fate has different plans, for all of them.
For more information visit:
Web: www.thorajeele.com
Facebook:https://www.facebook.com/thorajeele/
Twitter:https://twitter.com/ThoraJeeLe
Instagram:https://www.instagram.com/thorajeele/

Ali Zafar to Star in 'Teefa in Trouble'