"The Fate of the Furious" is Releasing All Across Pakistan On 13th April 2017. 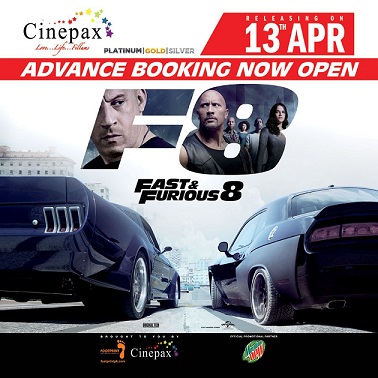 [Karachi: March 22nd, 2017]: The most stimulating action adventure and the Eighth installment of The Fast and the Furious franchise, The Fate of the Furious releases in Pakistan on the 13th of April 2017. Cinepax Cinema will open the advance booking nationwide on the 23rd of March 2017 for this much awaited sequel.
The Fate of the Furious is directed by F. Gary Gray and written by Chris Morgan and will star Vin Diesel, Dwayne Johnson, Jason Statham, Michelle Rodriguez, Tyrese Gibson, Chris Bridges, Nathalie Emmanuel, Kurt Russell, Scott Eastwood, Charlize Theron, Elsa Pataky and Helen Mirren. It is the first installment since The Fast and the Furious: Tokyo Drift (2006) that does not star Paul Walker after his tragic death in a car crash in November 2013. The plot of the movie revolves around how the whole team is trying to lead normal crime free lives; however it is Dom that gets into trouble because of a mystery woman that causes him to betray those close to him. They will face trials like never before.
Mohsin Yaseen, GM Marketing & Content, Cinepax Cinemas commented “Our team is persistently working on trying to make our customers more comfortable and making their experience pleasant and stirring. We look forward to cater to the excitement of people regarding this franchise. Advance Booking for The Fate of the Furious starts on the 23rd of March 2017.”
#TheFateOfTheFurious #BrandVoice