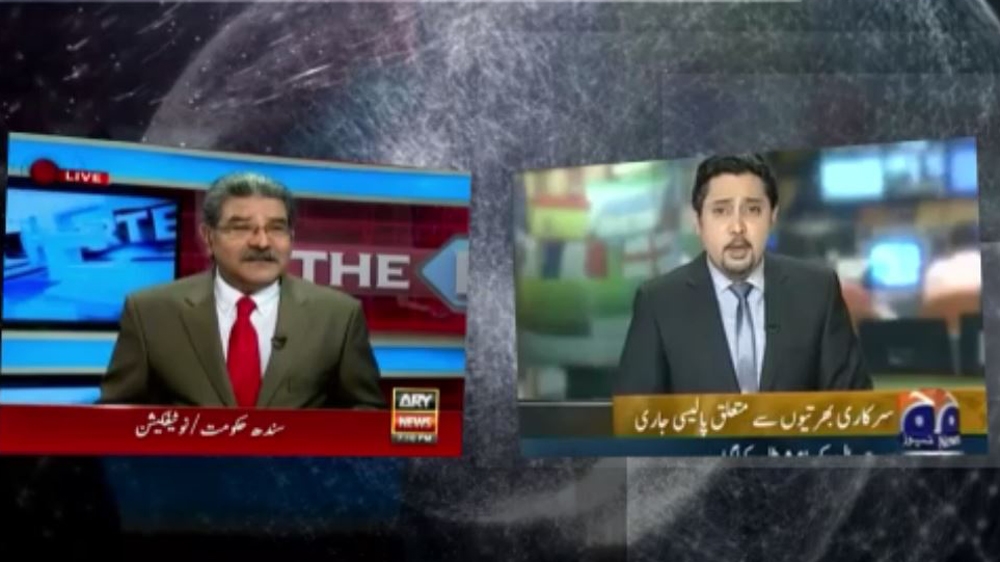 In a case which was filed in the previous year – 2016 and had failed to draw much attention, a court in London gave its verdict on the matter and convicted the owners of ARY News of slander as well as libel and ordered to award $3.7m in damages to the plaintiff, Geo TV.
The Listening Post’s Meenakshi Ravi reports on a somewhat complicated media story that reveals much about politics and power in Pakistan.
Sadaf Khan, director of Programmes, Media Matters for Democracy had her say on the matter and following lines quote her:
“The competition was rooted in how well the channels themselves were performing … but over time, it morphed into something way more ugly, way more public.”
April 2014 had marked a turning point in the competition between the two leading Pakistani channels – GEO and ARY.
After an attempt was made on the life of Geo News’ most prominent anchor, Hamid Mir, the journalist and his channel were put on a collision course with the Pakistani intelligence agency, the ISI. Mir reported extensively on the agency and further said that he was convinced that the agency was behind the attack on his life.
What is more is that this was not the first time the ISI was accused of targeting a journalist.
Three years later still, the issue of Mir’s case lingered with regard to the alleged rogue operations of the ISI and the issue put ISI back in the headlines, while ARY charged the case with further debate as well as by backing ISI. Supporting ISI led ARY to ostensibly align itself with the intelligence agency and the military (Pakistani establishment). Geo, on the other hand, was seen to be allied with the elected government.
A senior anchor and executive producer at AAJ Television,  Munizae Jahangir explained that “The Geo-ARY debacle was perceived to be a proxy war between the establishment and the government of Pakistan.”
The fight between the two leading channels continued, as ARY News made it personal by accusing Mir Shakil-ur-Rahman (Owner of GEO TV) of taking money from Indian intelligence and using it to defame and discredit Pakistan.
In their defense, GEO TV’s President Imran Aslam, shared:
“One of the main allegations was that we had run this campaign for peace between India and Pakistan, which was a media-led campaign – The Times of India, and The Jang Group had come together. This was completely an initiative that was funded entirely by ourselves – we had absolutely no funding from any international organisation, let alone intelligence agencies, and, and yet, continuously, documents were waved on the screen.”
ARY further reported that Rahman has escaped to Dubai with the active collusion of elements of the Pakistani government.
“Blasphemy accusations in Pakistan lead to vigilante justice,” says Khan.
Thus Geo TV and the Jang Group took their case against ARY News to the Pakistan Electronic Media Regulatory Authority (PEMRA) and the Pakistani courts, and as with most cases in Pakistan’s judicial system, their cases dragged on and are still pending. Exasperated by the slow pace of justice, Geo then turned to Britain’s legal system to clear their name.
As a result, the case was processed and cleared leading to ARY to pay $3.7m to Geo.
The case, however, has still not stopped slander or libel against GEO TV network.
Many see the public battle between Geo TV and ARY and characterize it as a low point for the Pakistani news media, as the spectacle which revolved around the two channels bickering on air, in courts, has not done good for either of the parties. Additionally, it only hints at a state of crisis in Pakistan’s news broadcasting space, which is considered the most influential medium in a strategically important country.
Conclusively, as their legal battle ends, it is about time GEO TV and ARY News take time to reflect upon the future of news and broadcast in Pakistan.
Note: The pointers for this article have been taken from Aljazeera’s website.