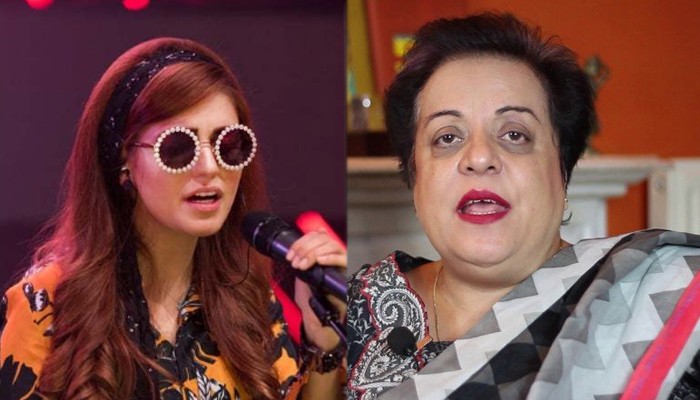 Coke Studio’s latest song from season 11, ‘Ko Ko Korina’ by debut singer Ahad Raza Mir alongside Momina Mustehsan has stirred quite a storm over the internet.

The situation apparently seems to being getting out of hand as too many parties have jumped in and have fueled the situation.

Ever since the song has been launched, people over the internet have been divided about how song has actually come off. To accept this song as a good effort on part of the singers or dismiss it as another mere failed attempt to create rendition of the track. (Read more about it here)

While the story hadn’t even begin to die down, Shireen Mazari, the minister of human rights tweeted about the song calling it a ‘massacre’.

Horrendous! Destroyed a great classic – why oh why did Coke Studio allow such a massacre of this classic song? https://t.co/Iq5gfCPYcr

Momina ofcourse took note of Mazari’s tweet and responded. Thus began a Twitter battle that has shaken the internet and seems like will continue to do so for long.

Apologies for hurting ur sentiments. It is ur right to judge us & express ur outrage,just like it was our right to exercise our #FreedomOfExpression. As our Minister of #HumanRights, u should appreciate @cokestudio for allowing us to express ourselves, esp if it was horrendous 🙂 https://t.co/OkYdSE0jCz

I gave my personal opinion which I am entitled to esp on a non pol issue having to do with music. To each his/her own! And why bring the ministry into it?! https://t.co/io9q0y6nAf

As someone holding office, I’d expect you to be more responsible with how you express yourself on public platforms. We look up to you, ma’am, as citizens of this country. Uncle Ben from Spider-Man said “with great power comes great responsibility”. Don’t let us down #NayaPakistan https://t.co/Ghvw5tivkd

R u serious! Liking or disliking a song has nothing to do with anyone or any politics! It's a personal choice. I did not like the song. End of story. https://t.co/7v01spfVZQ

After this Momina felt she was being cyber-bullied and…

When you hold office, its not about politics or his/her own anymore – it’s about the country at large. You represent all of us now, not just yourself or #PTI. In a time when we’re trying to curb cyber-bullying and hate speech, please don’t fuel it further #SocialResponsibility https://t.co/5cX0Z8OaMl

While Shireen Mazari made it a point to ignore Momina and not thought it best not to prolong the interaction, her daughter Imaan Mazari came forth with her own set of tweets.

At a time when we're trying to promote our artists, please behave responsibly and let the ones who can sing come forward instead of expecting us to appreciate those who can't. #moralresponsibility https://t.co/O5UfcQCQsY

I'm sure Mominah feels overwhelmed by the fun at her expense but at the end of the day, the fact remains that she picked a battle where there was no need to have one and in doing so, she made a fool of herself.

Point being: if you don't have thick enough skin to withstand legitimate criticism, dont triviliaze a serious issue (cyber bullying) 2 cover up ur sense of entitlement.Ppl mocking u 4 that entitlement are nt subjecting u 2 cyber-bullying.We all say silly things.Own up & move on.

I am honoured that I got to cover Ko Ko Korina. Some people enjoyed it and some not to so much, which is fair. Look at how we love to appreciate and criticize. It shows our nation is alive. Even after hearing the song 😉 Pun intended.

Most importantly I want to thank CocaCola who gives opportunity to youth, to new faces, who promotes experimentation which uur country needs and who dares to do things in their own style. Coke is almost a pioneer in taking risks in Pakistan. Lets not forget its COKE Studio.

I am also pleansantly surpired that the minister of human rights noticed out attempt, although she did not have very nice things to say, I'm still happy she noticed.
Just a peice of advice: better choice of words next time Ms. Minister.

Many other celebrities joined the bandwagon to give out their opinions.

As a joke, I should start a TV show where we get a couple of engineers to give medical patients brain surgery. Just to see what happens? You know, @cokestudio it! #goodlooking #famous #HereIsYourSong

Somewhere above #AhmedRushdi is crying 😢

What are your views on the whole matter? Do let us know in the comments section below.